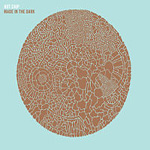 The electro pop Londoners from [tag]Hot Chip[/tag] have always struck me as your typical smart asses and I simply love them for that. Their awesome blend of smart and humorous knack has always made them terribly appealing to me and since their epic 2006 breakthrough, The Warning, I’ve been a fan. I’m all objective on this one, though, honest! And I can say, as honestly as possible, that the third record, from quintet, “Made In The Dark” is without a doubt their best effort and one of the most remarkable of the new year.

The last record, was full of fun and a bitter blend of pop, but it was missing something, it had the groove and the party starter vibe, but it wasn’t quite there. Made In The Dark, however, just hits it on the spot and fills all of the missing pieces, although at first listen it may seem like a messy amalgam of party anthems and synth pop ballads, it’s actually actually a well ordered and crafted record. Notice how I sad ballads? There’s quite a handful of them, like the title track “Made In The Dark,” with classic-soul guitar licks and choirboy vocal harmonies or one of the album’s centerpieces “We’re Looking For A Lot Of Lov,” a pretty sad song of a heartfelt simplicity, that just moves you. The ballads, although slow the fast pace of the album and are a bit of a bugger at times, are a good change from the “usual routine.”

Made In The Dark’s first single “Ready For The Floor” is of tremendous proportions, in wich influences from sister group LCD Sound System can be felt, especially vocally. The song has a great bass line, that’s sure to wake up those groggy neighbors and get the party started; a party club banger. The robot sounds the electro group’s been accustoming us with over the last years, is also present here in the form of repetitive and scratchy synths, namely in the opener “Out At The Pictures” or in”Bendable Poseable,” a song that would put even Daft Punk to shame.

It certainly is a very nice step up for Hot Chip, that’s managed to make a transition from it’s elitist indie hipster debut, to the rocky party goer that is Made In The Dark. It’s an almost complete album, as every song isn’t perfect; this is as good a pop album as one could hope for in this day and age.