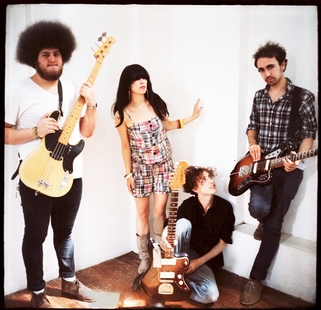 Yuck is not exactly the word I’d use to christen this up-and-coming English band. A group of four musicians, all very exceptional at what they do but who embrace a more tame style of play, Yuck can be described as a band strikingly similar to the Sonic Youth. This is very evident in the similarities between the minimalist approach to the amount of chords used in the song and the simple but tight guitar harmonies. Lead-singer and rhythm guitarist Daniel Blumberg heads up the group with a Kobain-esque approach to singing; he lazily conveys his thoughts through the microphone, throwing in a well-timed yell every now and again, somehow creating a pretty potent aura for the music.

I suppose this self-titled debut album, released on February 21st of this year, can be separated into two groups towards which its 14 songs gravitate; some are very hard-hitting and electric, while others embrace a softer melody with a strongly classic feel.

One such song is “Sunday”, which possesses an acoustic rhythm riff similar to that of an R.E.M. song, if not in strum pattern then in tone. “Sunday” is an interesting track in that it utilizes a clean electric guitar’s sound to accentuate the chords played on the acoustic guitar by note, which I have always appreciated; it is a little different that the electric guitar entered the song with heavy tremolo then later became clean, but it is relatively unnoticeable unless you listen for it. Unlike most other songs on the record, it provokes thoughts of good memories in the past…actually, it is unlike most songs on the album because it deals with the past (mostly). “Cold winter months, and I’m thinking of you, and how you’re not with me…I used to choreograph, the animals in the sea,” states the premise of the song, which basically carries on lamenting on the pain and confusion that results from a breakup. Acoustic touches in a song, in my opinion, seem to add the human factor into it, almost making it true; this is especially important for “Sunday”. It does help, though, to like the song….so, take a listen. If you aren’t into acoustic/electric combinations or you just don’t like songs of remembrance, this isn’t the song for you.

Another song on the record which represents the opposite side of the spectrum is “Get Away”. With a strong riff and strictly electric presence, “Get Away” is a plea for a change of scenery; it is a cry to satisfy that need to accelerate things in life. Most of us have felt this feeling at least once; the desire to accomplish what you know you can but something is blocking you from; the need to be with someone or do something you are prevented from doing by something else. Ironically, that ‘something else’ makes the desire to accomplish your goal stronger. Blumberg and his band of four make this all too apparent in the track, starting slowly and simply, but building with breakout licks over the rhythm guitar and a driving bass line, shown through some bridges in the song in which both guitars are silent and only the drums and bass carry on. The song is definitely worth listening to; it gets its point across. It can be slightly repetitive, however; if you aren’t one for repetitive lyrics, perhaps a different song would be better.

Yuck performing “Get Away” live at BBC Radio One.