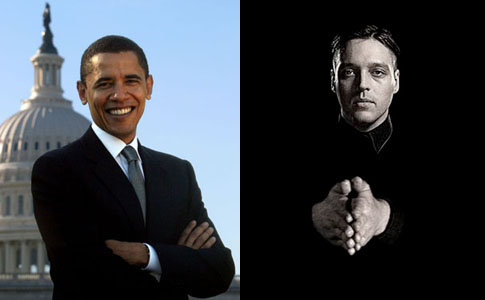 We usually don’t like to talk about politics, actually I personally hate it, but [tag]Arcade Fire[/tag] frontman, Win Butler, recent statement is worth posting, as it sums a bunch of sentiments, I myself had accumulated during these seemingly neverending election campaigns. Although Win rarely update’s his blog scrapbook, he makes it up for it with incendiary posts, like his recent outburst against Hillary Clinton‘s “bullshit” (I’m quoting, cut the crap), in which he heavily criticizes her deceitful ways and shows his unconditional support for Barack Obama, Hillary’s main competition for the White House office. I guess it’s better you read the blogpost:

I am watching Hillary Clinton in her victory speech in new Hampshire…they just threw a bunch of college kids behind her, and had her talk about student loans, and had her daughter come out for a long awkward hug…does anyone actually buy it? Surely young people are too media savvy to be fooled by this kind of shit.
do we live in a democracy so we can just keep electing the same families?
Barack is the first candidate in my lifetime to strip some of this bullshit away, and I just hope we don’t blow this chance.
man if we miss this opportunity we don’t deserve it…how bad does it have to get?

A bold writeup for sure, but as Butler is Canadian, I’m pretty reserved if people will actually take him seriously. I can already hear the trolling, but hey he’s born in Texas, so I guess that should count for something, right ?