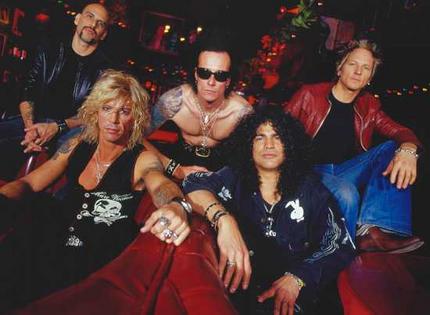 Velvet Revolver are definetly a mean green music machine. Their previous release, Libertad was acclaimed and was one of the best rock releases of the year. Blazing guitar parts, hard vocals and agressive lyrics made it an album which you have to listen to; and you can either love it or hate it, there’s no middle way.But the boys are not settling; instead, they are going on a tour and even planning a new album! The group wants to start working after they finish the tour that starts Jan. 24 in Chicago and includes dates in North America, Australia and Europe. Slash talks a bit about that:

“That’s the big thing right now,” he says. “I’m really jazzed about doing it. I’ve been working on new ideas, and we’ve had a couple times where the guys all got together and worked on some stuff. I’m itching to see what this third record’s gonna be, ’cause I think it’s gonna be fuckin’ awesome, and I think we don’t necessarily need to spend two years on the road like we did last time (for 2004’s ‘Contraband’).”

Slash adds that he’s “not gonna go so far as to say, ‘Yeah, we’ve got a couple of new songs done,'” but he says there are ideas and there is the will too, so they will most definetly start working. “As you go along you’ve got more and more freedom and are less inhibited to do whatever you want, just for the simple fact you’ve been working together for as long as you have, and you’ve established a certain creative relationship,” he explains. “Wherever we’re at (now) is definitely far and away beyond where we were a year ago, and we’re gonna go explore that.”

No producer has been chosen yet, but Slash says he would like to work again with “Libertad” collaborator Brendan O’Brien. But while things are going great with the band, former GnR guitarist says he still wants to release a solo album.

“The only progress is I’m starting to put it together as to how I’m gonna do it and who I’m gonna do it with,” he says. “It’s actually really in the back of my mind, but I haven’t gotten the wheels in motion to get it produced. It’ll be coming — probably the next thing I do after the next Velvet Revolver record. But if anything delays the Velvet record, I would turn around and do that (solo album) then.”