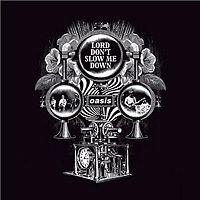 “Lord Don’t Slow Me Down” is the only download only single, ever to be released by [tag]Oasis[/tag]. The single will be available for purchase from most retail download stars starting from October 21, just a few days before the rockumentary with the same name will be released, a view on the band’s adventures during the “Don’t Believe the Truth” world tour from 2005/2006.

The video itself is a black and white collage of scenes from the band’s trek across the world during the Don’t Believe the Truth tour. Cramped Hollywood streets, narrow Tokyo alleys, Noel Gallagher in huge empty soccer stadium (maybe Manchester), masses, birthday parties; it’s all rather confusing. “Lord Don’t Slow Me Down” was originally intended to appear on the bands sixth album Don’t Believe the Truth, but was scrapped from the tracklist because Noel thought he did vocals on too many songs; can’t argue with that.