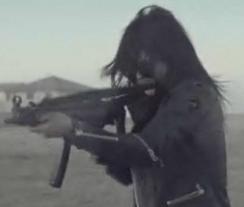 Yeah! Girls, think twice before asking of a man like Jack White to treat you like his mother. First, it’s plain weird, I mean what woman would want to babysit a full, grown-man (don’t answer this. We’re guilty enough as it is). Secondly, because he might bust a cap in your ass, as the new video for “Treat Me Like Your Mother” off The Dead Weather‘s upcoming debut plainly shows.

Quite the automatic showdown between Alison Mosshart and Jack White, the two exchanging more bluets than in ‘Nam and still leaving standing. Haven’t you guys seen The Highlander? You’re supposed to cut each other’s necks off, noobs!