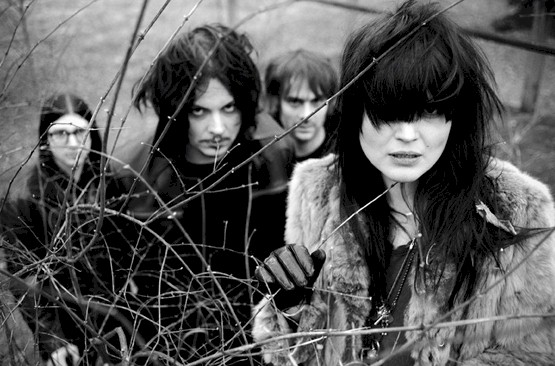 So we get to see yet another Jack White incarnation take to the stage this month. His Garage-blues supergroup, The Dead Weather, is booked to play New York’s Bowery Ballroom on April 14th.

They were officially announced as an outfit less than a month ago, when White moved his Third Man vinyl record label to his newly adopted home of Nashville, Tennessee. This time around, the multi-talented rock svengali has decided to have a go on the drums, giving The Kills‘ Allison Mosshart the bulk of the vocal duties while ex-Queens of the Stone Age Dean Fertita takes over on guitar. White has also drafted in his bass player from the Raconteurs, Jack Lawrence.

Ironically, the bands beginnings lie in the unfortunate circumstances of White suffering a slipped disc and a hefty bout of bronchitis and the end of the Raconteurs tour with The Kills – where Mosshart was brought up on stage to give a few encores and deliver the high notes. When the tour ended, Dean Fertita happened to be hanging around White’s Nashville residence with Mosshart the night before she flew home, and the three decided to lay down a 7″ in the studio – as you do.

So what can the crowd expect to hear at the band’s first official performance? Well by all indications, their sound isn’t going to be too far off from what we have heard before (imagine a psyched-up swamp version of The Kills with extra pair of hands) and so far it is sticking to White’s maxim of dirty trash can drum beats and thick electric-guitar riffs.

Their first single, Hang You from the Heavens (released on iTunes and limited-edition 7″ on March 11th) follows this familiar format, but is accompanied by the more curious Gary Numan cover, Are Friends Electric? – not exactly delivered with the punch of the original, though it still deserves kudos for ingenuity. The two tracks are taken from their forthcoming album, Horehound, which was said to have been produced by White in between trips to the circus and the gun range. It is set for release in June.

If you plan to be down the Lower East Side in a week’s time, tickets for the show go on sale on April 8th.