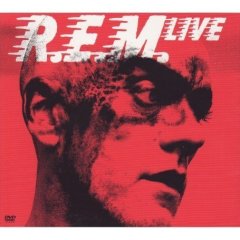 [tag]R.E.M.[/tag] is the kind of band which could bring people together. Their music has this weird and lovely ability to transform the plainest feelings and moods into poetry; they make music for the heart and mind. But they there are people who stopped listening to their music since Stipe made lyrics about politic. That is not the topic here. Politic is of no real interest and politic related tracks are not going to be discussed here.

But there remain a lot of lovely tracks; they are a 2007 inductee into the Rock and Roll Hall of Fame. This is their first live album. It shows performances in February 2005 at The Point indoor venue in Dublin, Ireland. They spend a lot of time there and the city is probably a home to them. Live offers the “greatest hits” on stage and should be an anticipation of the studio album in Spring 2008. They sing beautiful music. You should just listen to it and roll with it.

It could have been edited better but that is not a big problem. The first disc has 17 songs, the second only five. This is because it features performances from a two-night stand in Dublin, 22 songs which are relevant for most of their carreer; “Sweetness Follows,” “Seven Chinese Brothers,” “Electrolite,” are not here and they probably should have but that is not that bad. The sound is excellent and Michael Stipe gets into the music better than the Perfect Square DVD release which was not so bad but it was a bit strange. Michael Stipe is a wonderful singer but he is probably a bit afraid of the scene. He loves to be center stage but sometimes he just wants to get away from there; that is how it looks at least. His voice is warm and powerful but he does sing a bit out of tune sometimes. Those are pretty rare and you have to listen closely to hear that. Peter Buck gives the tracks a bit more energy and his guitar sounds a bit more lively than with previous shows. Those tracks which the band was promoting at the time are not bad but the oldies are by far better.

This release is a good listen but some of their work is not here. It is very high energy and high emotion and shows REM in their glamour; crank up the volume as loud as you can sing and find happiness in the music.