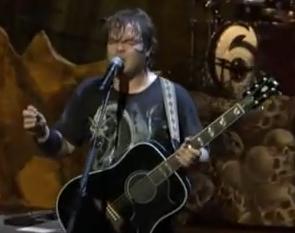 It’s really hard not to love Tenacious D, the greatest band in the world! OK, maybe not quite the greatest, but it’s definitely the most awesome satirical duo to ever grace a stage (Flight of the Conchords does a good job in coming up next). Anyway, I was grooving on Tenacious D’s “The Complete Master Works 2” DVD for the 4315161 time now,when it hit me. I had then just realized that up until now, I’ve yet to write at least once post about the D. Tsk, tsk, tsk. That really can’t do, so folks here’s real taste of the D, playing a medley of The Who songs from the band’s incredible 1969 album “Tommy” – off the must have Master Works 2 DVD.