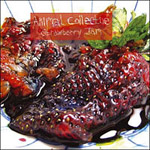 Anyone who at least gave a spin to a [tag]Animal Collective[/tag] album should know that their sound is far from commercial, extremely selective and most of the time plain old inaccessible. They’ve been regarded by most music savvy men as a bastion of quality indie music, alongside such acts as [tag]Arcade Fire[/tag], Bright Eyes or Surfjan Stevens, fact never reflected in their sales. Their past album “Feel“, although still maintaining the charasteristic experimental band features, opened the way for a more accessible path. “Strawbery Jam“, the seventh AC album, continues down the same road as its predecessor, a lot more catchy and listenable, fact that will assure the band some new fans, but make no mistake still very un-conventional and far from mass consumer friendly. This is a band that will never see mainstream success, and very unlikely to be heard on your local radio station.

If you can’t see and feel past the initial disgrunt for the album or have an unusual ear for the strange and surreal then bravo! You’re in for a treat, a marvelous explosion of samples, sounds and cartoony vibe; a return to childhood. Both of the two leading men in the band Avey Tare and Panda Bear, have each released critic acclaimed solo albums earlier this year, leading to a more relaxing AC album, you can actually sense the self-accomplishment in some part of the record. It’s amazing how a group of 4 ‘grown up’ men in their thirties, namely Panda Bear, Avey Tare, Geologist and Deaco, still can spread such childish joy through their music, at times Animal Collective struck me as modern time Peter Pans.

Jam couldn’t have hoped for any better intro then Peacebone, definetely the weirdest track, a electric mess intertwined with annoying drums, carnival percussions, toped by Avey Tare’s alien growls impersonations. Follow up to Peacebone, “Unsolved Mysteries”, comes as a relief, it’s a lot more gentile and calming, with a extraordinary watery chorus, never before heard in any of their songs. “Chorus” is one of the most dynamic songs of Jam, changing like the wind, from noise pop to easy moody drones. Although Strawberry Jam starts slowly I can say that the record really picks up with “For Reverend Green”, a lengthy revolving around distorted guitars, Panda tribal like drumming and Avey Tare signature vocals, with hear and there growlings, similar to Peacebone.

“Fireworks” is clearly my all time AC favorite song, a real gem! [tag]Beach Boys[/tag] influences can be heard thought the song, with melodic “ooo”‘s and “dooo”‘s in the chorus, and excellent marching beat on the background, perfect accompaniment for Avey’s urging voice. If you’re looking for this year’s perfect Christmas tune, then you might find “Winter Wonder Land” suitable, experimental percussions, synth pop vibes and overall AC hollyday joy are just a few of the songs highlights. Strawberry Jam comes to a closure with “Derek”, a song that begins with subtle percussions, but as it progresses turns once more in to military drumming and un-intelligible chorus.

Not as exclusive as the previous six records, but definitely no where near as accessible as mainstream rock bands. It’s their best yet and possibly the best record all round of the year.At first listen it may seem half-baked, lazy or just plain old annoying, a term many people use to descsribe the band, but what you have to do so you can trully experience the magic of this album is give a shot, or two… or even three, it will eventually sink into you. Then you’ll be able to appreciate Jam for what it really is: a modern masterpiece.