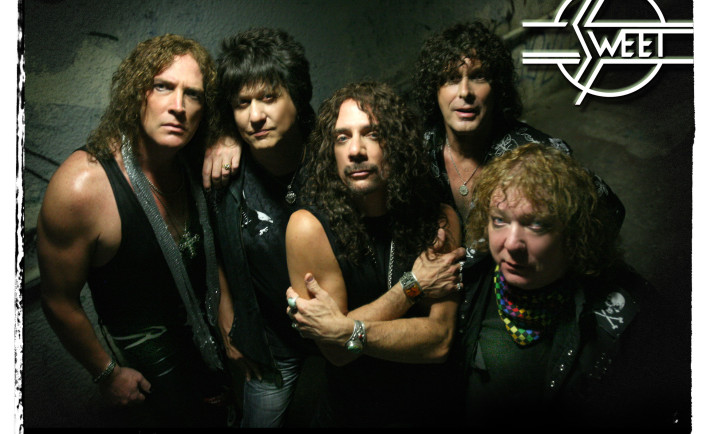 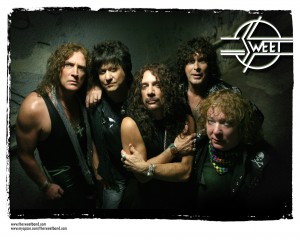 It was near the ending of the psychedelic rock generation that brought in the beginnings of Glam Rock. Bands like T-Rex, David Bowie and “The Sweet” were becoming main stream. It’s hard to imagine that some 40 years have passed and bands like Sweet are still performing. Steve Priest spoke with me before the show at Mohegan Sun Casino in Ct., and tells me that “The band is still going strong “and that “they are working on some new material”. The remaining original member of the current lineup, Steve Priest entered the Wolf Den stage wearing a Superman cape, a pair of sparkly black pants, and the traditional glam makeup. My first thoughts went to their influence on the music from the 80’s with bands like Twisted Sister and early Motley Crüe. To my amazement “Action” was the first of many hits on the song list for the night, it was just one of several classics that were dusted off and played with heart and soul. 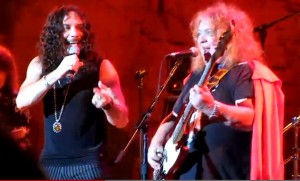 It was a captivating show for a Tuesday night, not a huge crowd but just about every table was full at the venue. The new lead singer, Joe Retta, attempted to pump up the audience but it appeared that most of the older crowds were just too dang tired to get motivated. Even though his attempts were futile, Joe and his zebra print, crotch revealing, spandex pants impressed the front row camera man several times with rock star prose. But to his credit, the vocals were up to par and he was truly entertaining with a wide ranging display of showmanship. Joe belted out classic songs like “Fox on the Run”, “Oxygen”, “Little Willie” and finally a crowd lifting encore of “Ballroom Blitz” hitting every note along the way. Playing alongside of Joe and Steve was drummer Richie Onori, Stevie Stewart on keyboards and the amazing Stuart Smith on guitar. Stuart stole the show; playing amazing licks on his guitar and making it look easy and sound great. The band was a clicking well and had been showing us what’s been missing from music for so many years ago, catchy lyrics, a big beat and plain ol’ entertainment.

This story can run in several directions when thinking about Sweet and the music of the 70’s. Music at the time was a strange mix of bands. For example, the Carpenters, with songs like “Close to You”, or maybe Roberta Flack with “The First Time Ever I Saw You Face” both in the early 70’s then we go to the Bee Gees, ABBA, or Elton John as it continues throughout the decade. Mixed into this jumbled assortment of music came glam rock. It was certainly standing out from the rest of the crowd with a pop style shocking rock edge for their time and into the 80’s. Steve Priest said “People didn’t know what to think” about the makeup and attention-grabbing costumes. It certainly kept people interested in the band but the music is really what drew us all in. You can search and see how many bands covered the songs like “Ballroom Blitz” but there is only one original – The Sweet.