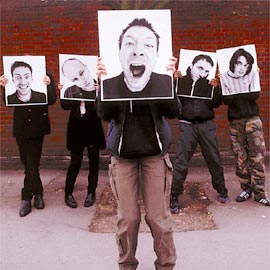 Boy, am I baffled, though. I’ve spent the last couple of days scorching in the sun while sipping mojitos on my recent, way too short vacation, thinking “Hey, it’s mid-season. Nothing interesting never really happens this time of year. The internet can do just as fine without me.” Was I surprised to find out Radiohead is the hot trending topic everywhere again, especially since Thom Yorke stated the band won’t be releasing a new album any time soon. Apparently most of us misinterpreted his intentions. He wasn’t sick and tired of new albums, he was sick and tired of the album format in general. Singles and EPs released sporadically, totally out of the blue, alongside some cryptic message or other viral web concept seem to work better. For Radiohead at least.

Last week, Radiohead teased the whole web with Wall of Ice, an alleged new EP that turned out to be only a cover up for a new song (or who knows…). The song is called “These Are My Twisted Words” and, until now, it kinda reeks of the word “DEMO.” Still, pretty awesome though. Excellent chops by Greenwood and Thom’s outlandish vocals, as always, resonate of metaphysical experiences. Would’ve made an excellent B-side for a record, not sure if more…

“We’ve been recording for a while, and this was one of the first we finished. We’re pretty proud of it. There’s other stuff in various states of completion, but this is one we’ve been practicing, and which we’ll probably play at this summer’s concerts. Hope you like it,” said Jonny Greenwood, the band’s guitarist, in a recent blog post. You can download These Are My Twisted Words here (including the artwork) or by following the link bellow.

[MP3] Radiohead – ‘These Are My Twisted Words’

There’s this, there’s the band’s tribute to Harry Patch, there’s Thom’s contribution to Mark Mulcahy’s Ciao My Shinning Star compilation and let’s not forget about Thom’s brilliant performance of Present Tense and the Latitude fest. A shit load of new Radiohead this summer and there’s no sign of stopping. YEAH!