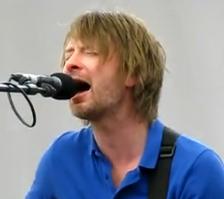 After last week’s cover of All For The Best, Thom Yorke is back once more, this time with a splendid new song. During his stint at the Suffolk-based Latitude festival Thom premiered the acoustic darling “The Present Tense,” which simply shined among the rest of the Eraser, Radiohead gems.

In other related and hilariously sad news, Thom Yorke is reported to have shown interest in contributing to the soundtrack for the upcoming Twilight sequel.

“Fortunately, I’m not at the stage where I have to turn anybody down yet, because everything is still kind of up in the air, but I am surprised at some of the bands that have said they’re interested. It’s kind of great. The criterion will still always be what’s right for the movie at that given moment, but Thom Yorke is interested. We might, if we’re very lucky, get Kings of Leon to do something… It’s exciting to be able to have access to this kind of talent,” said Chris Weitz the director for the upcoming Hollywood flick.

Definitely NOT cool at all, but I have a hunch this isn’t true. I mean, can’t possibly be true …can it? Anyway, check out the live video of The Present Tense bellow, as well as the MP3 (courtesy of onethirtybpm).