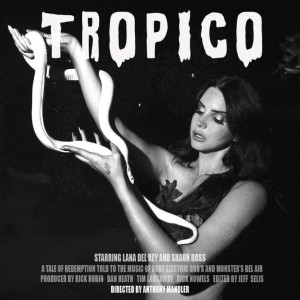 Tropico has a lot of elements related to the original sin and contains characters such as Elvis Presley, Marilyn Monroe, John Wayne and even Jesus. The songs played in the movie are: Body Electric, Gods and Monsters and Bel Air.

Also, before the screening of Tropico, Lana made an official announcement about her upcoming album:

I really just wanted us all to be together so I could try and visually close out my chapter before I release the new record, ‘Ultra-Violence

Enjoy the movie below!