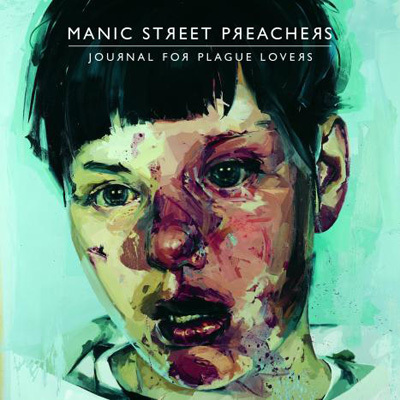 Provocative artwork? Surely not. That’s not blood on the cover of the new Manic Street Preachers album, just a boy with one side of his face more red than the other. Or to put it in more artistic terms a la frontman James Dean Bradfield, “a much more modern version of Lucian Freud-esque brushstrokes”.

But either way you look at it, this work of album-cover artistry for the Journal for Plague Lovers has been banned by Asda, Morrison’s, Sainsbury’s and Tesco – the four main supermarket chains in the UK and probably the four main sellers of CD’s on the high street. They have deemed the cover too offensive to the eyes of the overly-sensitive grocery shopping public. Of course, the smaller chains will surely have to follow suit.

In an interview with BBC Radio 6, Bradfield was adamant that there was no intention on drumming up some good bad publicity. Commenting on a reaction that he simply labelled as “totally bizarre”, he stated that “We just thought it was a beautiful painting. We were all in total agreement.”

And surely that much can be settled on. The artist behind the painting was the famous Cambridge-born Jenny Saville, who is best known for her work that was snapped up by art collector Charles Saatchi and who also contributed to the cover of the Manic’s previous album, The Holy Bible.

Bradfield further backed up his case by flexing his art-critique muscles and stating that anyone who was familiar with her work would have known “there’s a lot of ochres and browns, and reds and browns.” But we could forgive the managers and decision makers in the main supermarkets for their artistic ignorance – especially when they are so busy choosing which pictures of scantily-clad women and images of war will suitable to our tastes.

To his credit, the singer was also quick to add that “perhaps people are looking for us to be more provocative than we are being” and after all, it would be fair to say that the group’s wild heydays of press-hating, masochistic guitarists, arrogant album titles and a throw-it-all-away manifesto are well and truly over. Now that they look more like the type who like the sound of driving the kids to school rather than driving guitar chords, any attempt to release controversial artwork at this stage of their successful career would be just be sad more than anything else.

What’s important is that the album’s music has continued to get positive reviews across the blogosphere and musical press, with all twelve songs including the lyrics of former bandmate, Richey Edwards. There are also no singles to be released from Journal for Plague Lovers – according to an interview with bassist Nicky Wire on the Zane Lowe Show on BBC Radio 1.

And if you are one of the few who do decide to purchase a copy in your local Sainsbury’s or Tesco, it will come wrapped in a stunning blank cover, supplied by the publishers.

Journal for Plague Lovers will be released on Monday, 18th May.