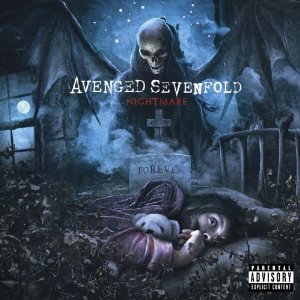 So after five weeks at number one, Eminem’s utterly bland Recovery was knocked from the Billboard’s top spot by another gray-scale release, Avenged Sevenfold’s Nightmare. The “metal” record moved 163K units to Eminem’s week six tally of 159K.

I don’t know how to feel about this. On the one hand, “Not Afraid” is Em’s best single since  “Lose Yourself” but the rest of the album is pop-rap nonsense with a few lyrical gems scattered throughout. It’s not a great record and I don’t know if it ever deserved the number one position. On the other hand, A7X’s album is worse: centerline-riding, pop-metal shlock that doesn’t deserve the top spot, either.

Both artists are certainly getting worse with every release, little by little.