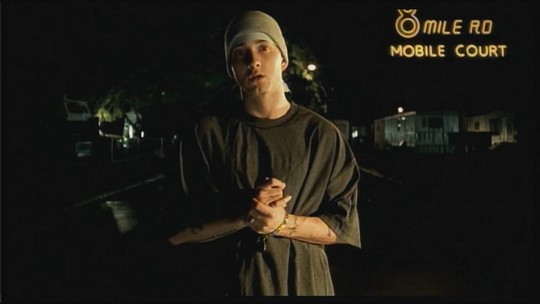 The best Eminem songs are the ones in which he actually has something to say, and usually it’s either something that will later start a controversy (like “’97 Bonnie & Clyde“) or discuss  some controversy to which he’s been connected (like “The Way I Am“). Yet, “Lose Yourself” doesn’t discuss anything in Eminem’s life. Well, not his real life anyway.  Instead he opted to first take an omniscient view and then a first person account of his character Rabbit from 8 Mile, the movie which spawned the single.

“Lose Yourself” not only finds Eminem at his absolute zenith, but it also demonstrates just how deep rap music has burrowed into the popular culture. Indeed, it won an Academy Award for best song (and was the first rap song to do so) and spent 12 weeks at number one.

The heart of the song, of course, is Em’s lyrics. Sure he’s played with words before, breaking them in two to fit a bar, or fooling around with assonance (see “Renegade“). But with “Lose” his command of the mic, both vocally and lyrically, is unsurpassed in his own – or, at the time, anyone else’s – career. Witness his ability to paint a picture of Rabbit’s crippling stage fright in the  song’s opening lines:

His palms are sweaty, knees weak, arms are heavy
There’s vomit on his sweater already, mom’s spaghetti
He’s nervous, but on the surface he looks calm and ready
To drop bombs, but he keeps on forgetting
What he wrote down, the whole crowd goes so loud
He opens his mouth, but the words won’t come out
He’s choking, how? Everybody’s joking now
The clock’s run out, time’s up, over, blow!

But he doesn’t shoot his load early. Perhaps the best moment comes in verse three where he takes on the role of Rabbit:

All the pain inside amplified by the fact
That I can’t get by with my nine to five
And I can’t provide the right type of life for my family
‘Cause, man, these goddamn food stamps don’t buy diapers

It’s as honest an account as you can get for being broke. More importantly, though, it’s incredible the way he bends syllables around the beat: in order to make the lines rhyme, he ends the first line with “the” and then emphasizes “by” in line two so that it rhymes with “five,” and then ends the second line with “to” so that he can rhyme “the,” “five” and “type of.” It’s astounding. And, yes, I know that Eminem is not the first to utilize this method. But just because he isn’t the first doesn’t mean he’s not the most proficient.

Among Em’s songs, this track is perhaps most noteworthy, though, because of its uplifting nature. The message of the song is simply to make the most of the once chance that you’re given in life. Eminem uses music, and Rabbit, as a microcosm to illustrate this point:

You better lose yourself in the music, the moment
You own it, you better never let it go
You only get one shot, do not miss your chance to blow
This opportunity comes once in a lifetime

Em candidly asks you to believe that you can do….well, whatever it is that you think you can do – be it writing that one defining rhyme, running that extra mile, passing that exam, whatever. So inspiring is the chorus that Jodie Foster quoted the song’s chorus during her 2006 commencement speech at the University of Pennsylvania.

But let’s not forget the music itself. After a somber piano intro, the song’s signature angular guitar riff kicks in. Then co-writer and co-producer Luis Resto’s airy keyboard arrives. Then the beat drops. Finally it all swirls together and weaves a sonic haze that Em verbally hacks through. Few songs of the decade are that atmospheric.

It all adds up to what is the best rap song of the Aughts – yes, even better than “B.O.B.” Sadly, it’s kinda too bad that Eminem peaked with this song seven years ago because for a few years at the beginning of the decade he was even edging out Jay-Z as the finest MC alive. But then he made Encore….Oh well, I suppose it’s forgivable considering just how great “Lose Yourself” is.