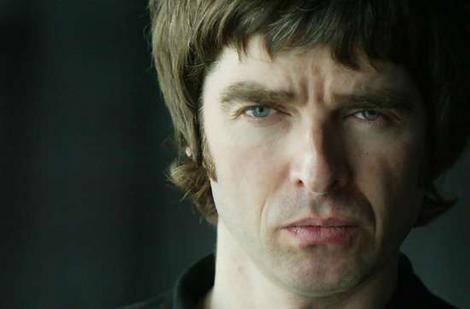 Noel Gallagher, the Oasis lead guitarist, semi-frontman and overall douche-bag, paid Zane Lowe a visit the other day, at the latter’s BBC Radio 1 show which he moderates. There, Noel talked about Jay-Z’s response to the Glastonbury scandel, as he listened to the Oasis dis song Jockin’ Jay-Z for the first time,’ stupid informed journalists who ask him about his latest album being leaked and also rudely jokingly encourages people to rip off other’s people music, as long as it’s not Oasis of course.

Honestly, I was very surprised to hear Noel reaction to P2P networks that leak out thousands of albums yearly, as he was quite positive about it, more or less, approving the practice. Heck, I thought he was gonna call P2P ‘eviiiil’ like the rest of them do. Truth be it, P2P doesn’t hurt artists as much as they think, actually it helps them a lot, because they promote their stuff extensively; the small bands, at least, would stand no chance of getting measly successful if it weren’t for the interwebs. Bands like Radiohead, Nine Inch Nails, Saul Williams, The Charlants and many other have understood this long time ago and have adapted to the modern, digital age, by giving away albums and enforcing a pay-what-you-will program. I actually wrote a column way back about Oasis giving away their upcoming album, “Dig Out Your Soul,” for free, but my hunch proved wrong.

Anyway, back to the Noel BBC show, because he has something really fun to share with us.

Whilst discussing the forthcoming Oasis album, Gallagher notes that a reporter from a UK national newspaper called him, explaining that the tracks had already been leaked onto the Internet:

“I had a guy from a national newspaper track me down and say ‘Have you got any comment to make? All of your new album has come up on the Internet!’ and I was going, ‘It’s impossible, it’s ludicrous’, because only four or five people had copies. So I said ‘Read out the song titles that are up on the Internet’ and he read out the track-listing from the last album! So I was like, ‘That’s on the Internet is it? It’s also in HMV – in the ‘O’ section…..you idiot.”

Aren’t we confident, Noel? Albeit the report was indeed an idiot. However, what if the new album were indeed to be leaked?

“No, it’s one of those things,” he told Zane. “If it’s out there and you can get it, you know, go ahead. I’m certainly not going to get into Lars Ulrich mode about this.”

When asked by Zane whether he condones in downloading stuff from time to time, Noel sincerely responded that “It’s well documented, I don’t even have a computer and I don’t get involved in that type of gear,” he said. Where you get your pr0n then? Still, what does Noel Gallagher think of piracy in general?

“If people are willing to have faceless CDs like that in their collection, good for them. It would be absolutely ludicrous for a rock-star to demand that people pay money for albums because the kids haven’t got that much money to pay for an album, so if they can find it for free, go ahead! But don’t do it on Oasis records though – because that’s against the law.”

Yes, Noel, very inspiring. Still, I don’t think kids will pay too much attention to your words and I sure as heck doubt your new album will be spared of any such activities either. The new Oasis album, “Dig Out Your Soul“, is out on October 6th 2008, so kids please do the right think and buy it. After all, Noel’s only ” down to his last £4 million.” For the video format of the interview, check out BBC Radio One.