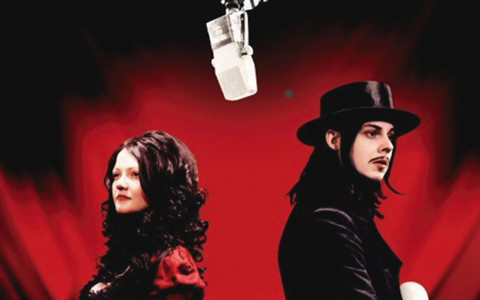 Last week the [tag]White Stripes[/tag] mad a mystery press release on their website, announcing that they’ll be releasing a few brand new tracks, a secret collaboration with a big artist and a new music video. Well I have to admit that the whole thing’s been bugging me this week, but luckily before I had any chance to deviate into paranoia, the Whites reveled their secrets. Firstly the mystery collaborator is none other then uber producer [tag]Beck[/tag], with whom the Detroit duo have recorded three new songs, in Mr. Hansen’s livingroom. As for the video? Well some of you will laugh, but the video is for “Conquest,” where Jack White is set to play a bullfighter…

The songs are featured on the B-sides of three separate editions of the 7″ vinyl for the “Conquest” single, each with its own color black,white and red. The “Black vinyl” includes “It’s My Fault for Being Famous,” which features Beck on vocals and piano, while the “White vinyl” has “Honey, We Can’t Afford to Look This Cheap,” which has Beck on slide guitar. The “Red vinyl” contains “Cash Grab Complications on the Matter,” which simply just has Beck as producer. If you’re not the biggest vinyl fan you can always download the B sides and “Conquest” single in the digital version from iTunes or any other retailer. The single is due in the U.S. December 18 from Third Man/Warner Bros. and in the UK December 31 on XL.

The video has been shoot in Artesia, California with director Diane Martel. “Filmed with a visual urgency that brings the song’s Spanish themes, frantic horns, and compulsive pounding rhythm to life,” their website adds, “the video follows an explosive– if unconventional– love story that pits man against bull in the ultimate conquest.” Jack actually trained for a while with professional bullfighter Dennis Borba. The video premieres on November 26.

Oh, and as a bonus “inspired by the ‘Conquest’ video, each single will also include a Mondo Toro trading card featuring the legendary, near-mythical matadors El Sloth, El Bianca Rosa and El Perdador. Despite being from early 1900s Spain and Portugal, these bullfighters look strangely familiar. U.S. copies of these singles will also include a different poster with each release.”