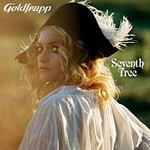 Well who ever thought, after making one of the most sexiest, sleazy and downright shocking album of the decade, in the form of Supernature, that Goldfrapp would release such a mellow fellow-up like the duo’s latest and forth album “Seventh Tree.” Most of Alison Goldfrapp’s and Will Gregory’s fanbase was built around the previous Black Cherry and Supernature albums, as well as various commercials in which Goldfrapp songs were featured, but what most people neglect is their chill-out, portishead-like debut Felt Mountain. Now, eight years since Felt Mountain, on Seventh Tree the duo has abandoned the electroclash exuberance that made them a worldwide phenomenon and chose a return to the roots, back to their debut’s vibe and ambient chill-out.

Many fans will undoubtedly feel this recent change in sound not to their liking, I mean the difference from electro glam pop to flower-power psychedelia or even retro folk music, isn’t exactly what I’d call severe, but it isn’t very subtle either. The general sensation for Seventh Tree would be slow, low and most importantly warm, a feeling most probably derived from the more extensive use of instruments, like acoustic guitars and strings, replacing the once ever-present synths, beats and various other electro glam elements. I for one am glad they’ve finally decided to step up their game a bit more, you can’t play in the same style forever and good musician, or in our case musicians, always knows when its time to experiment and evolve in sound.

The all round calming sensation of Seventh Tree can be sensed even from the opening salvo “Clowns,” a folksy, acoustically lead song in which Alison’s haunting vocals are finally more evident, even though they’re undecipherable, seemingly almost sung in a lost or even made up tongue like Sigur Ros‘ hopelandic. After the mellow “Clowns,” the more upbeat “Little Bird” follows, which, apart from the now common acoustic guitar, features some dazzling percussions and synths, as Alison lays down jovial la la las, that fill the air with optimism and hope, like fresh spring morning. “Happiness,” a song maybe too happy for its own good, probably would’ve felt better as the soundtrack for a psychotic movie about cults (“Join our group and you will find harmony and peace of mind/ make it better, we’re here to welcome you”). There’s a certain sinister and dark essence hidden, well within the song, that makes me feel a bit weary and restless, but at the same time safe.

Towards the middle of the tracklist lyes a true gem of the ambient gender in the form of “Road To Somewhere,” a blissfully languid ballad which recalls the best moments of Zero 7 and Air. “A and E,” Seventh Tree’s first single, is the perfect autumn pop anthem; a carefully produced moment of romance, that epitomizes the whole record. “Caravan Girl” is the most alive song out of the whole bunch, a pop juggernaut, packed with loads of euphoria and enthusiasm, that makes you feel like running away. The album’s last song, “Monster Love,” closes Seventh Tree in the same melodic and serene environment with which it opened with in Clowns.

Although I consider Seventh Tree, their best and most accessible work yet, some fans will undoubtedly get turned off by the album’s slow pace and quiet atmosphere. Even those unfamiliarized with Goldfrapp’s previous work might get bored by the album’s excessive tranquility, but that’s because this is a record that requires patience, a record that grows on you with each listen.