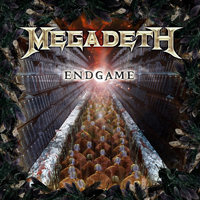 It’s a well known fact that instead of blood, a fine mixture of metal, vodka and pure awesomeness runs through Dave Mustaine’s veins. It’s what led him to deliver some of what many fans consider to be Metallica (and metal’s) finest songs, create blazing solos and make millions of fans headbang, but it’s also what caused him to change Megadeth’s lineup several times, for more or less right reasons. However, lineups were very good at least, and this time is no different – my compliments especially to Chris Broderick (who shreds alongside master Mustaine) and drummer Shawn Drover; the production is also flawless. All in all: Megadeth bloody delivers !!

Metal is definitely not dead, but it’s not experiencing its best years either. Endgame has just what metal’s been missing all these years: it’s heavy, fast, and pissed of as hell. Almost all metal acts today deliver some violent, even brutal singing, but none seem to be genuinely pissed off, and they lack either the will or the musical quality to write songs with this much substance, filled with varying tempo changes, elite guitar playing and blazing solos. Another big plus for the albums are the lyrics: Mustaine is perhaps one of the most underrated lyricists out there, as most phrases in this album make you think twice about what he actually meant; and if you’re thinking about comparing it to Death Magnetic, don’t even bother (I’m not saying Death Magnetic sucks or anything, it’s actually a good album, but Endgame is great).

The album kicks off with Dialectic Chaos, which lets you know right off the top that Megadeth means business, and they’re doing it the badass way. The epic tsunami of technical thrash is always welcome, and this instrumental track is perfect for setting the mood. It’s also one of the reasons why some fans have dispatched Broderick as a ‘heartless shredder’ – I’ll get into that after the track by track review. This Day We Fight follows up in the same tempo, only this time Mustaine starts shooting message after message, always coming back to the main phrase: This day we fight! It’s also where we find his voice to be more commanding than ever and it took me four listens to find small flaws in his vocals, but just like with really hot girls: it’s their flaws that make them even hotter. 44 Minutes stars off with some police radio messages, and things slow down a little. This is where they show once again what every metal singer should know: you don’t have to be fast in order to be heavy. Dave creates another trademark machine-gun riff that wreaks havoc and this my friends, is where you should figure out this is an epic album you’re dealing with; nuf said.

1320 is (unless there’s some really weird metaphor) about superbike/car racing, and well… it’s fast. Thing is, listening to the riff and Dave’s voice, you can almost smell the gas, melted rubber and nitro, and it feels GOOD. Bite the hand is a reminiscent 80s song with a modern twist, but for some reason, it just seem it doesn’t fit. Don’t get me wrong, it’s quite a good tune with great lyrics and production once more (no sense in mentioning technical achievements, it’s redundant already), but it just seems it doesn’t blend in. Perhaps placing it somewhere else on the album would have been a better choice, I don’t know. Still, it doesn’t kill the mood, and most importantly, prepares you for what’s to come. Bodies and Endgame are my personal favorites from the album, and lemme tell you this: we’re talking thrash metal at it’s finest. The harmonies at the end of Bodies are just brilliant, while Endgame starts with a calling I’ll let you hear for yourself and then brings a bit more groove (though losing some pace) highlighting the everpresent government theme more than ever, and you can’t really ask for anything more here; really, you can’t. Bad thing is, you’re thinking from now on, you can’t top this. But Mustaine shows his genius once more, as the album takes a slightly different direction here.

Basically, if you want to please all the fans you’ve got to have a ballad, and that’s where Hardest Part of Letting Go… Sealed With a Kiss steps in – A tout le Monde reminiscent, only heavier; only thing I can complain about here is that the tempo is a bit too fast too make the words stick in the listener’s head, especially as it’s quite a sinister story. However, Megadeth have never had a problem attracting huge masses of fans, and I’m sure they won’t start having this problem now. Head Crusher is the first single, and it’s a great choice. The intro will absolutely blow your mind, or crush your head, one of two. Pure metal mayhem, described by most people as the best track from the album. With How the Story Ends things are drawing towards a grand finale, but it’s quite catchy and will almost definitely become a crowdpleaser (Destroying every town/Light it up and burn it down). The closer is The Right To Go Insane. Musically speaking, it’s how St. Anger should have sounded like, and lyrically speaking, it’s all Dave Mustaine about the economic crisis. Heavy track with nice solo at the end, quite a pleasant way to end such an album.

Now, something about Broderick. You can easily see his classical training on Endgame as he delivers blazing solo after blazing solo throughout the album and you can see that he often plays almost as fast as he can and delivers some mind blowing licks at a really high tempo. However, it does seem that something a bit slower would work better at times, and his solos can become just slightly redundant (if you listen to the albums a number of times). However, I wouldn’t go so far as to call him heartless, but I don’t have anything real to backup my opinion and I’ve never had the pleasure of seeing him live. I would say he’s technically superior to Marty Friedman, but that doesn’t necessarily make him a better guitar player.

All in all, this is a fantastic Thrash album, with the ups and downs that it brings. It shows that Megadeth doesn’t give a fuck damn about what’s popular right now, and all they want is to create an awesome album. I think Dave Mustaine puts it best, and I’ll let him sum things up:

The album ‘Endgame’ is the most energetic music offering I have penned in over a decade and is far more believable than knowing someone signed ‘Endgame’ — the document — into law. The album is also the perfect ‘ass-kicking’ music to listen to once you are done reading the aforementioned document!”

He added, “This new album is my proudest moment since the famous (or infamous) ‘Rust in Peace’ album. With this album, I am also very excited to be introducing my new lead guitarist, Chris Broderick, to the world. I have always felt lucky to have had top shredders in that position, but after touring with Chris in support of my last album, I couldn’t wait to get into the studio and see what he could do.”