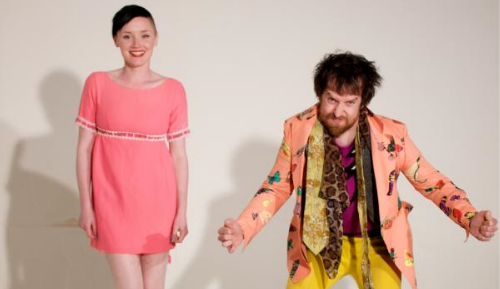 The bellowingly good news coming from last night’s Ham Sandwich gig is this: their new album is shaping up to be jolly good. (This has been calculated using science – specifically, an inventive method involving measuring the size of the bruises on the knees and thighs of myself and my colleague-in-jests, David Kirk, following the frenzied dancing of the girl in front of us, and the resulting pendulous swinging of her abnormally hefty handbag, during the new songs. We then do some complicated maths, while weeping and applying ice.) The bad news is this: that album’s still a while away, by the sounds of things.

The better news is this: it was a damned fine night of musics and good-natured whimsy.

One of the most striking things about Ham Sandwich is that there’s never any doubt where your attention should be be directed: if Niamh’s and Podge’s singing doesn’t draw your focus, their choice of attire will fix that oversight. (Even moreso last night, since energetic bassist/songwriter Johnny Moore has lately taken his leave of the group, replaced by the quietly stationary David McEnroe.) Last night’s outlandish garb included a dress made of shininess (that was Niamh, natch), and a colourful suit reminiscent of that worn by Rupert The Bear (Podge (the Rupert The Bear likeness was something of a running joke throughout the night. Ham Sandwich: the kind of band who have a running joke throughout a gig. Excellent.))

In fact, forget the double parentheses: the amount of laughter last night deserves to be loudly, unparanthetically lauded. When so many bands are so tiringly serious and stern and stony-faced, coming to a Ham Sandwich gig where Podge’s between-song banter gets to be so prominent a part of the show that he starts making jokes about it (“This is a long break between songs, isn’t it? Is it getting embarrassing yet?”) is a rare and wonderful delight. Even the pain of the protracted wait for their second album was softened by Podge’s excellent joke: “Are you excited about the new album?” (Audience whoops and hollers repsondingly.) “Haha! There isn’t one!”

At least I hope he was joking.

Not to be taken lightly, of course, are the actual songs, whose sometimes-melancholic tone collide intriguingly with the jocular patter. Of course, it helps that even at their most downbeat, Sammich never fail to drum up a  stirring whirlwind of crashing guitars and impassioned vocals – even seldom-played album closer “Thru The Grass” surged into a cathartically huge crescendo. If the songs delve into darkness, they certainly don’t dwell upon it.

And there are always enromous beacons of light: the universally agreed-upon Big Three – “Song in D/Never Talk”, “Click Click BOOM!!!” and personal favourite “Words” – were all present and correct (I’ll stick my neck out and declare “Words” an inch-perfect rock song – there is literally no moment of that song that isn’t stupendously exciting) and easily drew the crowd into happy-faced singalongs.

Which makes the present lack of a second album slightly disappointing: the setlist was dominated by new material, all of it glowingly received by the assembled throng, but with little or no familiarity with the songs, energy levels seemed to dip a few times throughout the night. New single “The Naturist” was a welcome highlight, as was a ballad I can only describe as “shimmery”, although I’ll admit to being slightly mystified at the absence of the lovely previous single, “Out of the Darkness”. 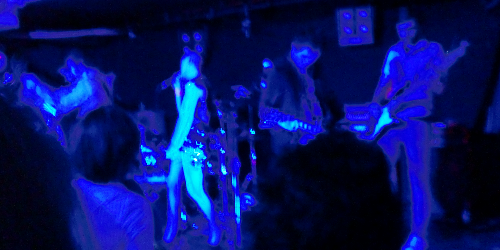 That said, dipped energy levels at a Ham Sammich gig are a very relative thing – it’s still a grinning crowd dancing to excellent music covered in multi-covered confetti, laughing along with a bearded clown in a yellow suit and flinging their loaded handbags into fellow revellers’ legs. Third time around, I can still say I’ve yet to see Ham Sammich perform less-than-excellently. I can also say this things: September (the presumably-still-accurate hopeful release date of that dashed second album) cannot come soon enough.

Also, do go and check out their handsome new website, and while you’re there, buy the  new single, which I lovingly discussed here.