[tag]Led Zeppelin[/tag] are considered by most critics the true pioneers of Heavy Metal, but also they epitomized the synthesis of multiple influences that characterized the best of 70s rock, while producing music that was stamped with their own dynamic identity. Along the years Led has had a brilliant career, spanning through their 12 year existence until John Boham tragic death, selling over 300 million records all around the world, releasing 8 LPs (all #1 both US and UK), thousands of gigs and a lot more, if any band deserves a last tribute, its Led Zeppelin.

This tribute has been materialized in the form of “Mothership”, a the ‘best of’ Led LP that is scheduled for release this fall, on November 13. The package will be consisted of a two disc set, containing 24 of the best Led songs, like “Stairway To Heaven”, “Whole Lotta Love” or “Kashmir”, hand picked by the surviving members of the band themselves. You can buy the LP in two versions “Deluxe” and “Collectors” edition featuring a bonus live DVD, together with 4 LP vinyl. 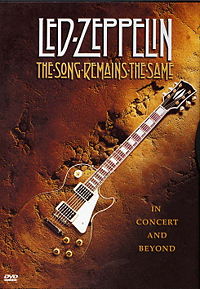 “The Song Remains the Same” (1976) soundtrack, the famous Led concert film, is also set to be remastered and re-released, under a “deluxe” edition DVD, containing six more songs that were not included on the original release (“Black Dog,” “Over the Hills and Far Away,” “Misty Mountain Hop,” “Since I’ve Been Loving You,” “The Ocean” and “Heartbreaker”) together with the remastered ’76 video itself ( HD DVD and Blu-ray formats). As a  bonus a 1976 BBC interview with Plant and band manager Peter Grant and contemporary footage from the robbery at New York’s Drake Hotel during the MSG run were also included.

Besides the “Deluxe” edition, producers ensured they include a “Collectors” edition as well, so besides the “Deluxe” DVD content you’ll be getting a T-shirt with the original album art and reproductions of memorabilia from the era.

Check out the tracklistings for the DVDs at Billboard.