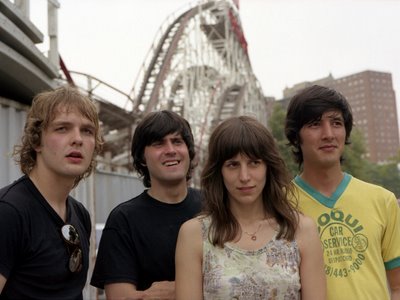 Widow City, the sixth studio effort from behalf of brother-sister act [tag]The Fiery Furnaces[/tag], is slowly, but steadily approaching. I’ve got to tell you, the anticipation is driving me nuts, every time I find a leaked song I’m all ecstatic and stuff, it’s got to be the most awaited album of the year for me. What I love most about this new album is that it’s so much different from what I’ve listened so far, ever.

Matthew and Eleanor Friedberger have really gone a long way since their debut Gallowsbird’s Bark in 2003; their music have pushed the edges of indie rock in so many different directions that it is impossible to hold them to one standard. I’m only half way through the album, and I can already make some pointers: it’s accessible, but under no means is straight forward, it requires a lot of patience for behalf of the listener; after you give it a few spins you’ll be able to appreciate and experience the true magic of their music.

“Ex-Guru” is a slight exception, it’s a lot more accessible and shorter then TFF have accustomed us to, [tag]Beck[/tag] fans will may actually love this track, as it’s more synth pop influenced and has some electro beats too. The mid-song Egyptian sample is great too and fits the song nicely, together with the bass and flout lines, while Eleanor F commanding vocals entice secure the song as a must listen. Also check out Navy Nurse, from the upcoming October 9, Widow City.