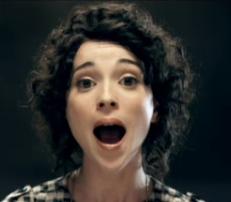 Annie Clark certainly never would have thought her video for “Actor Out Of Work” would get such a straightforward treatment, but when you watch front to back, you can then see beyond its fragile appearance.

In the video, Ian Kibbey and Corey Creasey, the two directors of the video, visioned the song’s vibe as ideal for that of a casting call. A swarm of people are lined up, each on a chair and then told to faint crying, while Annie sings her blissful tune. I wish the video was more dynamic though. Annie is just sitting there, motionless, although gorgeous. More Annie-centered videos next time, guys!

Oh, and here’s her take on the video for “Actor Out Of Work,” which premired earlier today on Spinner.

“At first I was a little reticent to interpret the video in such a literal manner — ie, with actors, casting calls, etc.,” Clark tells Spinner. “However, I fell in love with Ian and Corey’s treatment instantly. There is something so darkly comic and eerily unnerving about the act of crying on cue. It feels like such a lie — a betrayal in a sense — to see someone burst into hysterics in one moment, and then, as if it had never happened, stand up, smile and go back to checking their text messages. Sometimes I had to restrain myself from laughing out of discomfort, and sometimes I had to restrain myself from crying — it’s as contagious as yawning.”

“Actor Out Of Work” is off her upcoming sophomore album Actor, out May 5th. Definitely an anticipated release!