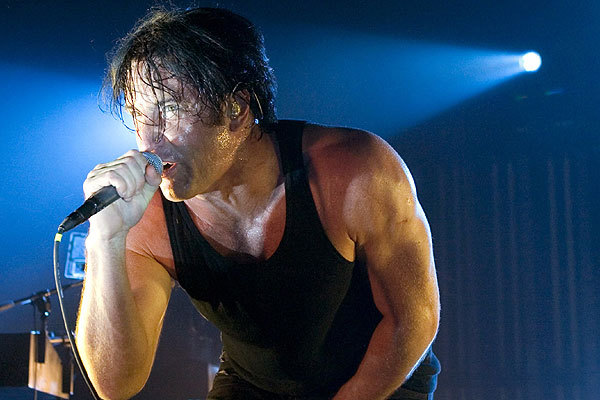 Aside from working on his major side project called How to Destroy Angels, Trent Raznor is also involved in videogame music (for Call of Duty: Black Ops 2), headphone partnerships, movies (worked on The Social Network and The Girl With the Dragon Tattoo)- but that still doesn’t stop him from working on a new Nine Inch Nails album.

In early 2009, he and the band announced they were embarked on a 20th anniversary farewell tour, and they ended the year playing intimate shows, all wrapped in a cozy yet saddening shroud.

“I’ve been thinking for some time now it’s time to make NIN disappear for a while,” he said. “After some thought, we decided to book a last run of shows across the globe this year.”

But he bounced back pretty quickly after that, always up for a new challenge, always working on something he loved.

“I’m grateful to have the opportunity to work. I’m just trying to approach things with integrity and try to find things that are interesting to me.”

Of course, that may have done a little for Trent Raznor fans, but Nine Inch Nails fans were not delighted. But now they have a lot to look for. Not only did he open a door for a new album, he also hinted at some new shows.

“Having a few years doing other things, I’ve enjoyed [them] and I’m enjoying doing How to destroy angels_, and there will be a place for stuff that falls in the Nine Inch Nails column of things,” Reznor told Rolling Stone. “It’s a different kind of work.” Regarding the trajectory of his past few years, he said, “It’s been an unexpected, weird ride. I’m just trying to approach things with integrity and try to find things that are interesting to me.”

Until that happens, here’s a little something from one of their last concerts in 2009: