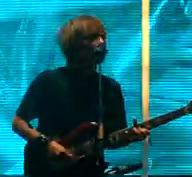 Last week Radiohead revealed a new, non-LP, non-EP track called “These Twisted Words.” “We’ve been recording for a while, and this was one of the first we finished. We’re pretty proud of it. There’s other stuff in various states of completion, but this is one we’ve been practicing, and which we’ll probably play at this summer’s concerts. Hope you like it,” said Jonny Greenwood of Radiohead. We really like it, Jonny, but no one expected you guys to play the song live so soon. I guess you weren’t kidding with the “at this summer’s concerts” part. Anywaaaaay, Radiohead started their first ever set in Austria, as part of the Frequency Festival in St. Poelten, with “These Twisted Words.” Check out this fan video bellow (great quality!).