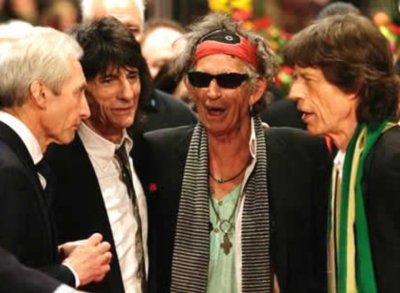 It’s nighttime in Paris; 600 lucky fans packed into the tiny La Trabendo rock club after paying $20 for a “secret event”. Definitely the best spent $20 in their lives, as they were treated to a royal surprise: Mick Jagger, Keith Richards, Charlie Watts and Ronnie Wood aka The Rolling Stones, in case you come from another planet.

The crows went wild as the Stones jumped right in and played their well known hits, including “Route 66”, “It’s Only Rock And Roll”, but there was even more set on for the night. They made the live debut of their new single “Doom and Gloom“. Damn man, talk about a surprise!

The hour long show left people deeply satisfying yet waiting for more (that doesn’t sound quite right, does it), but Ronnie Wood gave them (and us) some really good news.

“There’s going to be little club gigs that we’re gonna surprise ourselves to do as well”, Wood told. “We’ll bung a few in next week or the week after, so look out for any Cockroaches gigs or whatever! I don’t know who we’ll be billed as but we’ll turn up somewhere and put a few to the test. Tiny, 200, 300 people kind of places.”

So keep an eye out, folks! If there’s a “secret gig” in your city… don’t get fooled by the price tag – it may very well be The Rolling Stones.