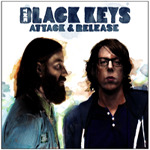 The Akron duo has always startled me as being terribly underrated, by the general public, considering their immense potential and talent. Sadly, timing wasn’t on their side. If you take a small trip down memory lane you’ll find that The Black Keys first started being active, round the same time another garage rock duo was gaining popularity, the now notorious White Stripes. Apparently the world’s not big enough to house two power duo’s, but while Jack and Meg have constantly experimented with their sound from recordc to record, The Black Keys have been content enough with their bluesy/garage rock sound. For four long albums the band has leaved their sound formula untouched, which although very tight and solid, could feel very repetitive and dull. On their latest effort, however, The Black Keys have finally managed to innovate and experiment with their vibe, through additional instrumentation and of course one of the best displays of production I have ever set my ears on. This is „Attack & Release.”

A lot of people enjoy the comfort that follows consistency and monotonicity, however change and progress are not only preferable to avoid …well boredom, it’s also necessary. Now experimentation can either be good or bad. Just like a late night out at a party, when suddenly one of your budds decides it would be a good idea to make an on the spot cocktail. It can be either surprisingly excellent, or, such is also the case with most band’s experimentations, downright awful. Respecting the analogy, Attack & Release is simply delicious!

I’ve said a few lines above that the album’s production is divine, well I couldn’t have expected anything lower then that from the likes of Danger Mouse (Gnarls Barkley), a longtime fan of The Black Keys. He actually approached Dan Auerbach (lead guitar) and Patrick Carney (drums) for a Ike Turner collaboration, but seeing as the later sadly past away in last year’s December, the project was taken over by the band and producer and transformed into a new Keys album. the results are fresh, intriguing, and often inspiring. Their lo-fi, bluesy guitar rock sound was now stretched to the limit and pointed towards a new direction. The results are fresh, intriguing, and often inspiring.

Don’t get this wrong folks, I’ve been talking so much in the review about a change in the band’s sound, that I might make it feel like they’ve reinvented the wheel. No, far from it. Their still that awesome drums and guitar duo, that rock hard and reminisce the vinyl days of ’70s garage rock, but of course, this time with a twist. For example „I Got Mine,” „Remember When (Side B)” or the record’s first single „Strange Times” are conventionally classic Keys songs, but the much of the rest of tracks are beautifully different. First thing that comes to mind is „Psychotic Girl,” a song packed with psychedelic groove, which includes, appart from the inseparable electric guitar and drums, an acoustic guitar, an organ and even a banjo, played by Carney’s uncle Ralph.

Worth noting is the fact that Attack & Release is a lot more calmer and slow (well most of them at least), then their previous material, with songs ranging from slow burn ’70s blues to acid jazz, like the touching „Lies” and „So He Won’t Break”. The Keys have even successfully played a bit with bluegrass on, what’s my absolute favorite track, „Things Ain’t Like They Used To Be,” a beautiful duet between Dan Auerbach and Jessica Lea Mayfield, an 18-year-old rising country talent.

All round this is a great release and nice breath of freash air. Those extra strumentations hit the right spot, helping the duo expand their already skillful musical ansamble. Hats off to Danger Mouse for pulling this album out, with a remarkable display of production skills. It’s a definite pleasure to the ears, although long time fans, looking for ‘Till I Get My Way’-esque stompers, may get a bit disappointed, but for those of you willing to listen to bluesy, slow and soulful songs, then Attack & Release will provide some of the best of the year 2008.