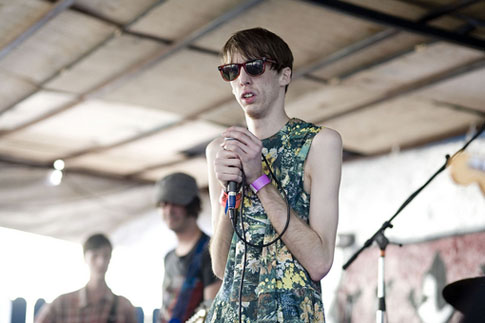 [tag]Deerhunter[/tag] lead singer Bradford Cox is undoubtedly a very creative artist, known for releasing tons for material separately from his albums and shelving even more songs in his “closet.” His debut solo album “The Blind Lead Those Who Can See But Cannot Feel”, recorded under the moniker Atlas Sound, is set for the release date of February 19, under the Kranky indie label. All LP’s instrumentals have been recorded entirely by Bradford, under the watchful eyes of Kranky labelmate Nudge’s Brian Foote, thus making this a truly solo effort.

“This album is for my best friend Lockett,” says Cox in the press release, referring to Deerhunter guitarist and best friend Lockett Pundt. “It has a lot to do with childhood. I wanted to make an album that was uplifting but honest, which is why it seems sad a lot of the time. I want to make music that could be ‘healing’ or therapeutic to people who relate to it.”

He’s also a man who apparently grows bored pretty fast, thus he recorded a brand new EP, during the 10 hour drive from Switzerland  to Austria, titled “Altitude Sickness.” Talking about the 3 tracks on the official Deerhunter blog, Brandon says: “These are reinterpretations of a few of my favorite doo-wop songs filtered through a thick gauze of motion-sickness and boredom…”

You can download Atlas Sound “Altitude Sickness” EP from the Deerhunter blog, or from the direct link here.