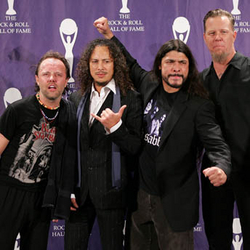 The famous [tag]Metallica[/tag] drummer Lars Ulrich has stated, in a interview done after attending Rock Werchter Festival in Belgium, that the band has finished recording the backing tracks for its, not yet titled, ninth studio release.

The band last album “St. Anger”, was launched in 2003 and was dubbed by hardcore fans as a disaster naming it unpolished and under-produced.

Ulrich said that they will return to the recording studios in August, estimating that it will finished by late October/November, but also stating he doesn’t think the album will be released any sooner then 2008.

This is the first album with Metallica for the new bass player Robert Trujillo, who took the time for a interview earlier on 29 of june, in which he describer the new records as following:

I would say that this album is dynamic, heavy, groovin’ and you’ll probably be excited to know that there will be guitar solos in it! In addition, Lars remembered to set his snare drum properly this time! For me, this album incorporates part of the dynamic and character of “Master of Puppets”, as well as the melodic style that people liked in “The Black Album”, as far as the melodies are concerned. As for the general music style, much of the current material is groovy, heavy, dynamic and surely interesting. I would say that it’s different than St. Anger, in a good way of course.

It remains to see if Metallica can still produce quality work as “Master of Puppets” or “The Black Album”, I for one have great faith in them. Rock on Metallica!