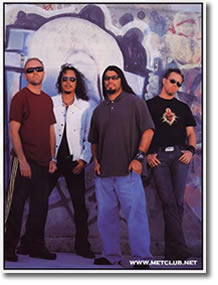 After a few weeks ago [tag]Metallica[/tag]’s drummer Lars Ulrich and bass player Robert Trujillo took the time to be interviewed, reveling details concerning their ’08 spring album, it’s time lead guitarist, Kirk Hammett, to show some love and provide a little more info on the much awaited upcoming release. Hammett confesses for MTV, in a interview, that the new album is, in playing style, somewhere between 1989’s …And Justice For All and its 1991 follow-up Metallica, better known as The Black Album.

Here’s a snippet from the 10 minute video interview by MTV:

“It’s coming along fairly well. We wrote 22 songs with the intention of recording 12 or 14, with the intention of putting maybe nine or ten on the new album, depending on how they all turn out once they’re all finally recorded and mixed and done. The music is really heavy — surprise, surprise — very, very progressive; different from anything we’ve ever done before again. Yes, there are guitar solos.

Yes, the production will be slightly better. We’re using Rick Rubin. We’re not recording in HQ [the band’s rehearsal studio/headquarters in San Rafael, California]; we’re recording down in L.A. at a place called Sound City. And we’re just about to finish the drums, the drumming aspect of it. And when we get back to the States, that’s when Rob [Trujillo, bass], James [Hetfield, guitar/vocals] and I start playing our instruments and building tracks. We’re all pretty psyched about it. The material, we feel, is very, very strong. I like that to think that it sits somewhere between …And Justice For All and The Black Album — that little niche right there. And like I said, again, it’s very, very different.”

And that’s not all, drummer Lars took the time to answer some questions Thursday for Sweden’s TV4 in a video interview, in which he revealed some info regarding the state of the recordings.

“James [Hetfield] is gonna start singing in August and [we’ll] do some overdubs.” He added, “We’re gonna spend another couple of months in the fall to finish the overdubs and we should hopefully mix the record by November and have it out in the early spring.”