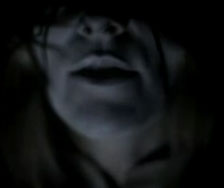 I’ve just finished watching Karim‘s latest video for the chilling “Triangle Walks,” that just premiered over at stereogum, at the end of which is hard for anyone not visually impaired not to sit back for a few good seconds and gasp “WOW!”

The video just hits you from the very few frames – beautifully dark-blue lights, ambiental chills and Karim Andersson’s elusive appearances make it a creepy, yet, at the same time, a surreal experience. Not as evident as the other two videos for If I Had A Heart or When I Grow Up, but Triangle Walks’ eerie subtleties make it far superior.

The video was directed by Mikel Cee Karlsson, who was deeply involved in previous The Knife and Jose Gonzales video projects. Oh, and if you loved the video, know that most of her live shows aren’t too different. If you liked the song, you should definitely check out Ben Hoo’s remix of Triangle Walks as well.

Triangle Walks is off Fever Ray’s incredible self-titled debut out now. The single will be available in the US starting June 23th.