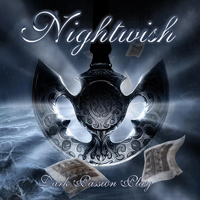 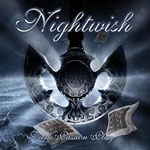 Three years have passed since the previous release of the band. In 2004 the finnish quartet gave Tarja Turunen over 60 minutes material which is more than hard to play; it was so hard it could break the neck of almost any mezzo-soprano in the studio and she sang it in concerts with the smoke and the effects and the screaming crowd right in front of her. So she began distancing herself from the band and she was more or less fired. Then the media started doing its thing and wrote more or less true things about that and rivers of teenage tears flew downstream. Then they had to find a new singer and they located Annete Olzon.

That is just a part of the release background. After three years of developments and 1.000.000 Euro spent and probably many hours of recording at Abbey Road this is what you get. This is probably the most adventurous outings of the band since it is more diverse than anything we have heard before. But they had to do this since their singer has another style.

It starts with Poet and the Pendulum which is almost a quarter of an hour epic. It could be a statement to anyone who may have questioned the future of the band and an epitome of the release but it is just too bombastic. The staccato effects they use and the drumming can cause a heart attack for the faint of heart. But the important thing is that it is the first true contact you have with Olzon’s voice. It resembles ABBA. It is very clear and bright but way pop for what they sing. It also does not fit the drama and the scope of what Nightwish means; or what it meant. And sometimes you can hear her making efforts to stay in key. Bye bye beautiful is a hidden message for Tarja Turunen; strangely or not Olzon’s voice is not the highlight. Marco Hietala screams for about 4 minutes and he shows why he is a tenor trained for about 20 years. The drumming is again stylish and powerful.

Amaranth brings the first video which could easily be called Avril Lavigne-esque. It is catchy and it has no substance. Cadence of her last breath is worse than the previous track. It resembles karaoke playing. So Master passion greed is what they needed. It is a furious reminiscent Children of Bodom lovely orchestrated blow out. Hietala roars out “who the hell are you to tell me what to do…” and it just makes you want to bang your head. Probably the track which resembles most at what level nightwish was at years ago. Hietala climbs 3 octaves up without losing a breath; he is the wildcard and somehow with his voice and his bass he keeps it together. Vuorinen who is the guitarist is quite aggresive here. He has obviously growed as a guitar player and has reached a higher level. You can notice that while listening to Eva. Without him it would be a very bad track; as it is you could say that it is ok in a mainstream kind of way.

Sahara is something strange which brings together eerie sounds and a celtic beat with arabesque music in the form of metal. Huolopainen can make music out of anything and this is a living testament; but it somehow does not fit the band. Whoever brings the night is the first track worked by Vuorinen and it is nice. You can feel that Annete has what it takes to escape from the good girl singer kind of style but she is just not quite there. For the heart I once had is not bad. A little roller coaster. The islander is Hietala 100%. There are few things to say about it. He just played with an accoustic and this is what he got. Probably the most touching track the album has and his voice is again just breathtaking. The violins are also very good. Last of the wilds resembles an Oldfield instrumental sang by Nightwish. It is breathtaking again. 7 days of the wolves is predictable but Annete sings a bit soprano without being an opera singer.

They tried to do many things with this release. Introduce Olzon to the listeners and bring the music to the mainstream without losing the more underground true heavy metal listeners and show other singing ways without straying from their origin. It does those things but neither of them to the full. It is a split which tries to give a bit to everybody and show that they can do more. But the best parts are the orchestral bits so Tarja could just have been that which the release lacks.