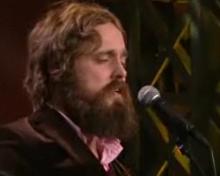 Here’s a sweet performance by Iron & Wine, playing a live version of “Flightless Bird, American Mouth” a few nights back on Jay Leno. In a characteristic Sam Beam way, the whole experience was relaxing, eerie and pleasant. Proof again that he’s just as good both on stage and in the studio. Off his critically acclaimed, 2007 released “The Shepherd’s Dog.”