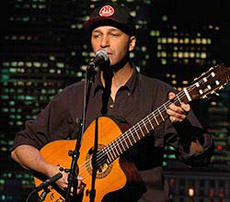 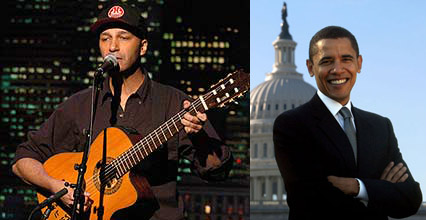 What does [tag]Rage Against The Machine[/tag] guitarist Tommy Morello and Presidential candidate Barrack Obama have in common? Well according to Tommy the similarities between them are quite striking…

“Well, you know, being the half-Kenyan Harvard graduate from Illinois in his early forties, not running for president this year’s election gives me a unique perspective,” Morello tells Rolling Stone’s Austin Scaggs. “I’ve always felt more comfortable on the other side of the barbed wire fence, you know, lobbing musical Molotov cocktails at the party.”

“If America elects a black president it will be a different country than the one I’ve seen my entire life and that would be a step definitely in the right direction,” Morello added.

Politics does go to well with RATM, I mean leave it to Zach to spit out a few lyrics and you’ll know what I mean, so what’s with this recent, political orientated mindset? ” I don’t think it has anything to do with rebelling against a President. It has to do with policy. The Democratic Congress was elected in 2006 to end the war and they rolled over like lap dogs,” Completes Morello the above quote, almost knowing how we feel. So, Mr. Morello, any predictions?

“In the next presidential election America will get the president it deserves. If after eight years of Bush’s foreign and domestic crimes that we elect a Republican president, you know, it seems to me like you should be able to run a barnyard animal against a Republican and win in a ninety-ten split,” Morello says. “So if America elects McCain over, you know, the clearly intelligent, erudite, fair-minded Barack Obama, then either way we’ll get the President we deserve.”