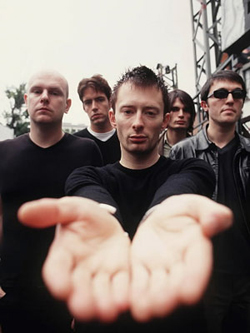 April’s fool day prank or not, the lands from Radiohead have just announced that they’ll perform a another free entrance live setlist on April 1st, this time within the more spacious confines of London’s BBC Radio Theatre. The band made a similar attempt, back in mid January, when they announced and played a live concert, in a cramp location in downtown London, all in one day.

The BBC will give out tickets either by applying by phone or winning them over the airwaves, so be sure to keep your ears pealed on the radio. “You’d be a fool to miss the concert,” said Radio 2 head of music Jeff Smith, making reference to the concert’s scheduling on April Fools Day. The gig should prove to be great practice for the band, before they head out on their summer tour.