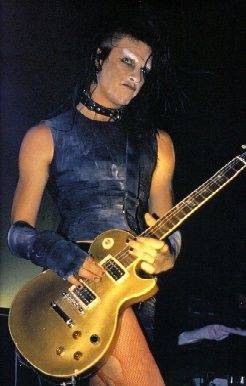 Robin Finck, the man who played in Nine Inch Nails in the mid 1990s then again in 2000, has rejoined the band. Well they say that 2 wrongs don’t make a right, but now they can do just that.

After quite some years in which Chinese Democracy has not been released and after the pretty lame NIN release, Ghosts, there was a need for a change in both bands. Finck toured with Trent Reznor and co. during tours that coincided with the release of the ‘Self-Destruct’ and ‘Further Down The Spiral’ albums by the band.

The was then recruited by Axl Rose in 1996 as a replacement for Slash (yeah, right). It’s still uncertain how much he worked on Chinese Democracy, but then again what is certain about that album? He toured with the band in 2001 and 2002.

So now he rejoined NIN just after they’ve announced some US live dates for 2008, beginning at the end of July and including an appearance at the Lollapalooza festival on August 3 in Chicago. OK, are they going to sing tracks from Ghosts? That would reaaaally be worth your money. The sound of cows eating grass … live!