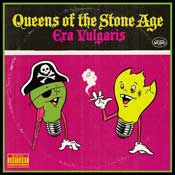 I gotta tell you guys i’ve been waiting for [tag]Queens of the Stone Age[/tag] new album to come out, for like forever and when i finally got the leaked version i began to feel aching in my stomach and a chilling sensation down my spine, just the sheer anticipation of hard rocking overwhelmed me. I had a lot of great time with Lullabies To Paralyze, their last album, with tracks that will forever remain in my heart: “Everybody Knows That You’re Insane” or “In my head”, now they’ve reached their fifth album release: “Era Vulgaris“.

I’m pretty sure all of you QotSA fans, have seen the youtube teasers released somewhere in February, in which we could see in-studio footage Josh Homme, Joey Castillo, Troy Van Leeuwen working on the Era Vulgaris tracks. Some big names have collaborated on this projects, names like: Julian Casablancas from [tag]The Strokes[/tag], Trent Reznor from [tag]Nine Inch Nails[/tag] or Billy Gibbons of [tag]ZZ top[/tag].

The album debuts with “Turning On The Screw”, five minutes of grinding riffage and heavy drumming, that jump starts us heavy pop track Sick, Sick, Sick.“, for which the music video was released two weeks ago. Hard to follow lyrics are common on QOTSA tracks, as it’s the case with I’m Designer“, a trippy rock’n’roll song

For those who are familiar with the Desert Session album “Over The Years And Through The Woods“, they may recognize “Make it Wit Chu”, a very different piece then anything they’ve ever played before. “3’s & 7’s” has indeed the potential to be the next album’s single, with it’s catchy beat and rhythm, that precedes a very melodic and slow “Suture Up Your Future“, in which Homme’s vocal abilities are once again showcased as never before. The album ends with a burst of noise “Run Pig Run“, with guitar and drums banging all over the place.

After listening the album for over ten times till now, i have to say that it didn’t disappoint me in any way, maybe even exceeded some of my expectations. What can i say Queens of the Stone Age have done it again, yet another brilliant album!