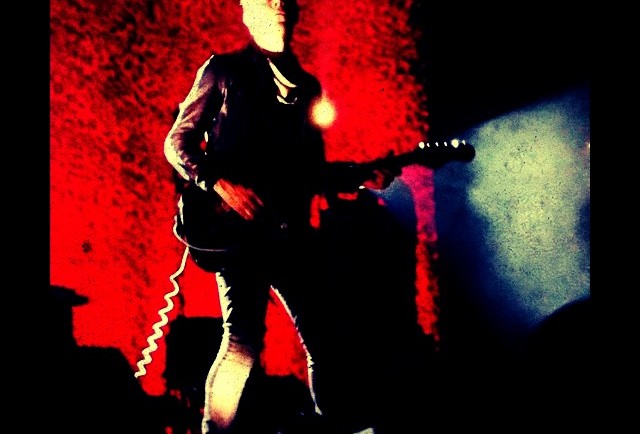 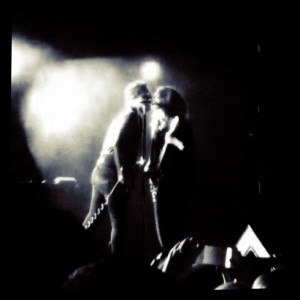 Jamie Hince and Alison Mosshart (respectively) during "Kissy Kissy" at the Oakland Fox, 9/9/11.

All is quiet in the Oakland Fox Theatre; the Friday night air (in which the scents of various types of alcohol and stale breath swim) has never been so…silent. The crowd waits, enthralled, hanging on any sound they could manage to hear from beyond the black side-curtains of the stage.

Boots hit the hardwood stage floor, but their sounds only ring out for a moment; the crowd soon comes alive with the anticipation of what is to come.

The crowd unleashed like one big, screaming mass when she took the stage, the click-clack of her boots keeping time with whatever music had left its footprints in her head, which was covered in a fiery pink (fresh from a dip in the dye), messy-cool mop of rock n’ roll hair.

Soon he appeared, too, donning one of his many desert scarves and thin grey jeans; his sinewy hand searched through the limelight for his other appendage…his Hofner Galaxie, which has cranked out many tracks, ranging from “F*ck the People” to “Black Balloon“…

Static surged through the crowd when Jamie Hince‘s fuzzy amplifier took to life…a myriad of feelings came together and exploded at once, producing the first few rumbles of “No Wow”. Murder was in their eyes, dancing with amity and woe and irony and colour and emotion; they were shrouded in grit and outlined in all of the art and hooky music that made them…them.

And so, it began; the Kills were at it again.

Now, I’ve been to many concerts, I assure you; therefore, I’ve experienced plenty of different energies and sampled the art and livelihood of many bands, including the Dead Weather (with Alison Mosshart herself), but this gig was unlike anything I’d seen before…even Mosshart wasn’t the Mosshart I’d seen a year ago (I caught the Dead Weather at the Warfield in San Francisco on July 22 of 2010)… Some traits of her Dead Weather days (such as her increased boldness and sensuality in vocal styles and the darker undertones of their music) were prevalent, but she wasn’t exactly the same; I felt as if I were watching the real Alison Mosshart this time around.

It was a bit surreal, really, to see them take to the stage like that… like a trainer would to a lion, whipping and screaming and moving to create grace out of complete catastrophic ferocity…to squeeze life from death…and to succeed.

There were times when I caught myself just standing there, idly allowing their pure vibrations to play me like one of their instruments. Consequently, I wondered if they knew just how they had us…Oh, how they had us.

As I glanced about the crowd in which I stood (amongst the hipsters of General Admission), I realized that we were all just like fish in the Kills’ ocean, swelling and lulling and sucking, in-out, at the tide…feeding off of it. Even their stage crew, who had periodically poked their heads out to deal with the equipment near the leopard-print background, seemed amazed, though they saw this most every night. One man, strange as it may seem, even sat atop a crate near the far left hand side of the back of the stage awhile… Hince and Mosshart seemed to not have noticed. They were on the music.

Everything…everyone…was on edge. Mosshart drew us in with the temporary sweetness in her voice, only to cast us out again, leaving us directionless in a plasma of sound that only continued to draw us nearer again. Another glance at the crowd during the ethereal breakdown of “Black Balloon”, or in the very first electric jolts of  “Fried My Little Brains”, and I knew the crowd was hopelessly mesmerized. Enthralled. Festooned. Enchanted.

I find it disappointing, looking back on it, that all of the audiovisual remnants of the concert are crackly and distorted cell-phone videos, but I really don’t recommend you watch them online, anyway…

I mean, I wasn’t just waiting around to write this; I’ve been in musical shock this past week. I find it absurd that it’s even been a week. Even with the slight difficulties challenging the drum machine here and there, the show was phenomenal. I still have way too much to say and I probably won’t say it by the time this article draws to a close.

To put it plainly, they were style and art and music and passion, all lumped into one wrecking ball of sensual beauty (in which Mosshart took good psychological hold of most lustful males in the crowd) and one middle finger to the conventional. 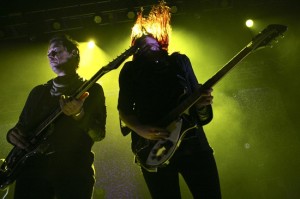 There was a time, however, when the tough mold was shattered; Alison Mosshart surrendered her incomparable cool and Jamie Hince surrendered his fevered guitar for a more melancholy aura…

“It’s the last goodbye, I swear…” she sang unto us, so obviously pained with the all-too-fresh memory of the once favoured one for whom she wrote this song, “I can’t rely on a dime-a-day love, that don’t go anywhere…”

As Hince (who had, until then, been rather electric that night, interacting with the crowd, including Your Humble Narrator) worked the synthesizer behind her, Mosshart began to tremble under the boomlights… and the crowd noticed. Needless to say, lighters went up. Her willingness to share such a sad, sobering emotion with us (that of love and love lost), was heart-wrenching, but leveling; it reminded the crowd that they, too, were human…we all were. We were all…level.

It wasn’t just an act…although I never really believed it was. 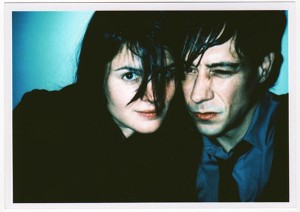 To get the full Kills experience like I did, be sure to catch these two live!

Sadly enough, this leg of the Kills’ tour, in support of their latest album Blood Pressures, has recently drawn to a close; to keep tabs on upcoming dates, visit their Facebook page or Ticketmaster.com.