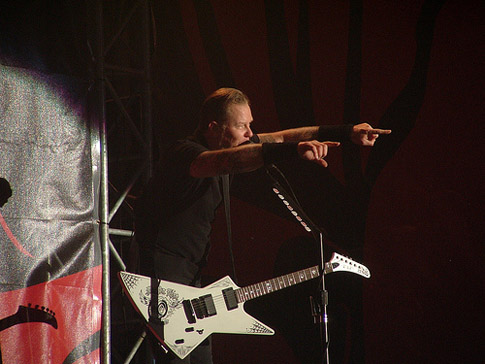 We didn’t have a chance to write about this, but about a week ago Metallica previewed a mix of songs from their forthcoming new album, to a bunch of journalists in London. Apparently there was a misunderstanding, though, and the subsequent reviews of the material where quickly withdrawn from various websites, within minutes from their posting. Now, the band itself (the whole mix was put to the journalists disposal by their management) are back to clarify the issue and to provide some interesting insights on how they view the internet, mainly the blogsphere, and feedback in general.

While we occasionally enjoy reading the various comments, rumors, speculation, reviews, gossip and all the good that the internet brings, rarely do we feel the desire/need to respond to the “blogosphere” … hey, everyone is entitled to have their thoughts and opinions, right? However, once we re-surfaced on Tuesday after a few weeks on tour in Europe, we were informed that someone at Q Prime (our managers) had made the error of asking a few publications to take down reviews of the rough mixes from the new record that were posted on their sites. Our response was “WHY?!!! Why take down mostly positive reviews of the new material and prevent people from getting psyched about the next record … that makes no sense to us!” So after a few rounds of managerial ear spank and sentencing everyone at Q Prime to 20 push-ups each, we figured why not take matters into our own hands and just post the links here on our site. Kerrang, Metal Hammer, The Quietus.You see, we have maintained an “in the press” section here on Metallica.com for many years now, posting links to reviews of shows, album and DVD releases, and various other tidbits we’ve come across while surfing around. Some good, some not so good, but we put ’em all up … sort of the same way we treat our message boards on this site … welcoming all feedback.

So in the spirit of keeping this section current, we’ve put as many of the reviews of the rough mixes of the new record up here as we could find. If we missed any, let us know … and in the meantime, we’re always adding, so peruse at your leisure.